I love waffles. Waffles however, are full of carbs, gluten, and a lot of sugar in many recipes. So as I’ve been doing the latest DietBet (Mama Laughlin’s Dietbet) I wanted to have something for brunch that was a little healthier than the traditional waffle. Now, I do have a gluten free, sugar free belgian waffle recipe that I made by modifying my favorite traditional belgian waffle recipe, but gluten free flour is not low calorie.

I decided I wanted to try some protein waffles, so I came upon this recipe for protein waffles from Kim’s Cravings and decided to give it a try. The first try was a disaster, because my waffle maker which was nonstick died, and my mom gave me hers since she never uses it, and it is apparently NOT nonstick. I ended up with pieces of protein waffle that I drizzled coconut almond butter on. Not photogenic. I did make some changes but they are really small. Visit Kim’s website for her recipe, I changed it up because I have only unsweetened/unflavored protein powder and I also wanted to use a whole egg.

Protein Waffles
Original recipe by Kim’s Cravings, I barely modified this is basically her recipe.

You will probably also need some water, depending on how thick the mixture is. When I used whey protein I only needed about a tablespoon, but with the pea protein I needed 1/4 cup or so.

In a small mixing bowl, beat the egg with a fork, then add stevia and vanilla extract.
Add dry ingredients, baking powder, cinnamon, and then protein powder.
At this point, once all dry ingredients are mixed and there are no lumps, determine if you need to add water. Add water one tablespoon at a time until it is at the right consistency.

Once the waffle iron is hot, spray it with non-stick cooking spray. Add the batter to the iron and cook according to the waffle iron’s instructions. This recipe makes 1-2 waffles depending on the consistency of the batter. It definitely makes no more than one serving.

I had no trouble getting two golden brown waffles with pea protein but with whey protein it would only make 1-1/2.

The first time I tried the recipe, I used my go-to protein powder, Isopure unflavored whey. When I started using protein powder, I did a lot of research on which type to get and I decided to get an unflavored kind because it is more versatile. At the time I was interested in making sure that I was getting enough protein, as someone who eats mostly vegetarian, so I was dumping into coffee in the morning, soup, adding it to salads, basically any meal I wanted to add some protein to.

I have wanted to switch to a plant-based protein so I recently purchased NOW foods unflavored pea protein.

The whey protein did not make enough batter to cover the waffle iron, hence the holes. They also did not get that pretty golden brown, the first picture has coconut almond butter on it so that makes it look a little more brown. They were very crispy though, and tasted slightly stale and dry, probably because of the whey protein. The second time I tried the recipe, I added 2 tablespoons of Mama’s all purpose almond blend gluten free flour which did make them fluffier but they still tasted kinda stale.

The third time I made them, I tried my new pea protein powder and it was WAY better. The ones with the pea protein turned out much more golden brown, they didn’t taste stale, and with the 1/4 cup of water which  I needed to add to get the right consistency – that pea protein is THICK! Damn. Be advised that this stuff makes everything very thick. With some crunchy almond butter they were absolutely perfect and I want to eat them every day!!! 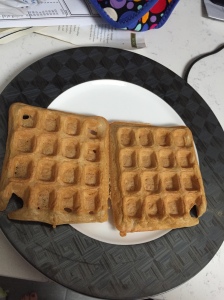 What’s great about this is that they are super easy to make, they take hardly any prep time at all, so you could easily have these on a weekday morning. You can top them with whatever you like, I used about a tablespoon of almond butter and around a tablespoon of organic 100% maple syrup. These two easily came out of the recipe although as I’ve mentioned, there is significantly more water needed than with the whey protein.

Next time I will make extra and freeze them, but unlike my gluten free non-protein waffle recipe, they are so easy and quick there’s really no need to make them ahead of time.

Get To Know Me! 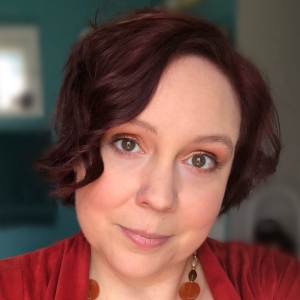 About me
My weight loss journey

My Other Projects:
Not 26 Anymore Beauty
Thrift Chico’s

Shop more of my closet on Poshmark Sign up with code NOT26ANYMORE and save $5 off your first purchase!